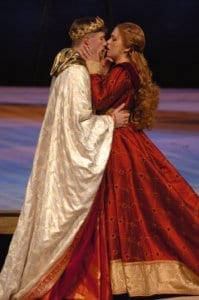 In 1847, scenes from a Shakespeare play (Henry IV, Part One) were part of the University of Notre Dame graduation exercises for the first time. Performances from other Shakespeare plays were repeated sporadically in later commencements until in 1884, the inclusion of scenes became so standard that it was referred to as “the annual Shakespeare entertainment.” And thus, began a rich history of Shakespeare at Notre Dame. The program has grown from those first semi-regular occurrences to the cultural bedrock it is today, inspiring the exhibit Full Circle: Shakespearean Culture at Notre Dame.

The visuals of Full Circle: Shakespearean Culture at Notre Dame are captivating. It’s hard to know where to look first when entering the exhibit. In one area, three vibrant costumes and a ship’s wheel—all from the 2016 production of The Tempest—are shown on a teal-and-copper shimmering fabric that evokes thoughts of the sea. A nearby section reveals a case that suspends eight swords used to teach combat classes for productions of Richard III, Henry IV, and Henry V. Still another area features football helmets from Love’s Labor’s Lost and a rocket pack from a recent production of A Midsummer Night’s Dream.

Also on view in the exhibit are costumes, props, set designs, photographs, and playbills from Macbeth, Julius Caesar, The Taming of the Shrew, Twelfth Night, The Merchant of Venice, Love’s Labor’s Lost, and Othello, just some of the Shakespearean productions that have been seen at the University of Notre Dame over the years.

Intriguing stories in the exhibit about Shakespeare at Notre Dame’s community outreach include the first performance of ShakeScenes in 2003, a program that has introduced thousands of young people to Shakespeare each summer. The Notre Dame Shakespeare Festival’s Touring Company regularly plays to audiences across Michigan and Indiana, with a dozen or more performances in parks and theatres. Another local favorite, begun in 2017, is Shakespeare After Hours, which performs adult-oriented takes on Shakespeare at LangLab in South Bend. Shakespeare in Fremont Park, also established in 2017, is a seven-week program involving community-based organizations in South Bend.