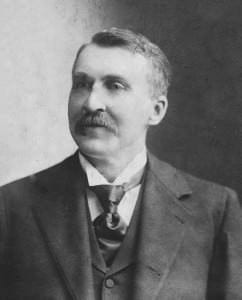 In the 1870s, Nelson Prentice Bowsher owned a shop on the West Race of the St. Joseph River, just south of the Colfax Avenue bridge. He also worked for Mr. James Oliver, the founder of the Oliver Chilled Plow Works. They became close friend and when Mr. Bowsher decided to start a factory of his own, he gave Mr. Oliver his word that he would not make anything from the chilling process that Mr. Oliver had patented and a process that Mr. Bowsher knew.

The Bowsher factory was started in 1882 on West Sample Street, adjacent to the Colfax Wagon plant, where pony wagons were built. Mr. Bowsher took over the plant and began making feed grinders for cattle feed, mill cogs, balancing weights, and some items of his own invention. He spent an enormous amount of time traveling the newly opened West marketing his products.

Nelson Bowsher died in his early 50s, but had two sons who were old enough to take over the responsibility of managing the business. Jay C. Bowsher handled the financial end of the business and his brother,

Delevan Bowsher, ran the factory, which prospered and continued to make mill cogs and grain grinders. Bowsher grinders were known and the top-of-the-line of the burr mills (machinery that grind hard, small food products between two revolving abrasive surfaces separated by a distance usually set by the user. When the distance is larger, the resulting ground material is coarser).

A foundry was built to make the parts for the burr mills.

Jay C. and Delevan ran the operation until their deaths in the early 1950s, when Mr. Nelson Bowsher, son of Jay C. Bowsher, took over the operation of the factory and foundry.

By 1970 the factory and operation came to an end, when Nelson sold the mill cog business and stopped making the feed grinders, which were made obsolete by glass-infused steel silos for feed storage and other methods of feeding cattle and livestock.