The O’Brien Corporation was founded in South Bend in 1875 in a small shop on what now is Lincoln Way West.  The founder was Patrick O’Brien, who had developed a revolutionary new quick-drying primer for the carriages and wagons of that era.  Patrick had once worked for the Studebaker Brother’s wagon company.

O’Brien selected the site of the company’s facilities on West Washington Avenue after fire destroyed the original O’Brien Electric Priming Company’s plant.  Between 1882-85, several buildings were constructed on South Bend’s west side and in 1893, the corporate name was changed to the O’Brien Varnish Company, which remained until 1948 when the company assumed the name of Fuller-O’Brien.  Uniroyal Adhesives and Sealants bought out part of the Fuller-O’Brien company and still operates on West Washington Avenue in South Bend. 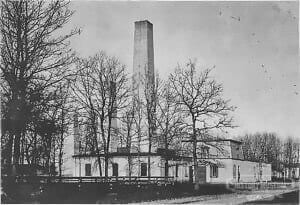