The first successful airless blast cleaning method, called the “wheelabrator,” was developed during the Depression.  The American Foundry Equipment Company changed its name to American Wheelabrator and Equipment Corporation in 1946 due to its diversification of products; and in 1955 it became the Wheelabrator Corporation.  A merger with four companies occurred in 1971, creating Wheelabrator-Frye. 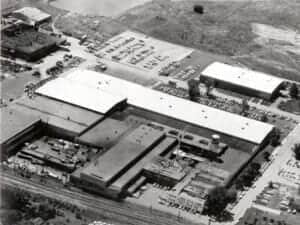 Wheelabrator remained a small manufacturer of these and other devices well into the 1960s. In anticipation of Clean Air Act legislation, the company expanded interest in environmental products by acquiring a license for electrostatic air cleansing technologies from the German company Lurgei. This led to the establishment of the Wheelabrator Clean Air Company in Pittsburgh, which manufactured systems that electronically removed dust, soot, and other particles from flue gas.

Wheelabrator was then acquired by a small conglomerate called the Equity Corporation. The company was paired with another subsidiary, Frye Copy Systems, a manufacturer of printing inks and carbon paper. Equity encountered severe financial problems in the mid-1960s. The company was taken over and reorganized by a New York investor group led by Michael Dingman of the Burnham securities firm. Dingman eliminated the Equity company and merged the Wheelabrator and Frye units.

With the engineering expertise of Rust, and with exclusive access to the Lurgei and von Roll technologies, Wheelabrator built its first waste-fueled energy plant at Saugus, Massachusetts. The plant came on line in 1972, at the height of the first environmental movement in the United States. A second plant was not built until 1983, when more efficient plant designs made incineration cheaper.

Change in Ownership During the 1980s

Wheelabrator Frye was acquired by The Signal Companies Inc. in 1983, for $1.5 billion. Michael Dingman, chairman of Wheelabrator Frye, was subsequently named president of the new parent company. Wheelabrator, its name changed to Signal Environmental Systems and continued to develop new resource recovery systems in areas where landfills were nearing capacity and garbage dumping fees were rising. As a result of the Signal merger, the unit took on numerous engineering operations of the parent company, including engineering services for the petroleum, paper, metals, and chemical industries.

In August 1985, Edward Hennessy, chairman of the chemical giant Allied Corporation, engineered a merger with Signal–then an aerospace, electronics, and engineering company. Three months later, Allied-Signal resolved to spin off all operations not related to the core businesses. The company identified 35 units to sell, including Frye and the Wheelabrator environmental systems unit. Rather than dispose of the companies individually, a process that would take more than two years, Allied-Signal created a holding company under Michael Dingman. Dingman, a rowing enthusiast, named the new corporation after the English rowing mecca, Henley. One of the largest subsidiaries of the new Henley Group was the environmental systems unit, which took the name Wheelabrator Technologies.

As an independent organization, Henley was run more as an investment company than an operating company. In 1987, as Henley’s Wheelabrator, Fisher Scientific, and other manufacturing groups prospered, Dingman engineered a series of creative schemes to maximize shareholder value. He took each of the units public, selling non-controlling interests to shareholders and simultaneously raising cash for other investments while gaining independent stock valuation. Shareholders paid a premium for the opportunity to directly share the risk of operating single-industry divisions with the parent company.

After dabbling with substantial investments in the Santa Fe South Pacific Corporation during 1988, Dingman turned Henley’s focus back to revaluation schemes. In a so-called “reverse spin-off,” he created two independent companies, Wheelabrator Group and a new Henley Group, which divided the assets of the old Henley company. Over the next three years, Henley’s investment in Wheelabrator dwindled to less than 10 percent of the company’s shares. Phillip Rooney took over as head of Wheelabrator.

While Dingman was ringing up his successes with share value maximization, he oversaw a significant series of events in the structural development of Wheelabrator. Shortly after being spun off from Allied-Signal, Wheelabrator exchanged 22 percent of its shares for the under performing waste incineration assets of rival Waste Management, Inc. The agreement was more of a business arrangement than the result of a competitive battle. Waste Management had established an incineration business purely as a defensive measure against competitors such as Wheelabrator and the Ogden Corporation, but lack of engineering know-how and pressure from various forms of public opposition hindered Waste Management’s ability to enter the business on a significant and profitable basis. The deal with Wheelabrator included exclusive rights to dispose of incinerator fly ash at Waste Management facilities and other transferred properties, which was essential for Wheelabrator’s growth as new incineration plants could not be built without guaranteed ash disposal resources.

Meanwhile licensing for disposal sites had become nearly impossible to gain due to strong public opposition. Wheelabrator responded by conducting excellent public education campaigns and proposing to work with any public advocacy group that opposed Wheelabrator incinerators. The company sponsored several series of public hearings, offering to answer any questions, and taking every opportunity to demonstrate the environmental advantages of incineration over landfills. In addition, as landfill charges rose to more than $50 per ton and incineration costs fell to $30, Wheelabrator could demonstrate growing economic advantages to its methods of disposal. Once public approval was gained for construction of an incinerator, Wheelabrator would conduct regular tours of the site, inviting the public to inspect the operation personally and ask questions. By maintaining an honest and open relationship with the public, Wheelabrator managed to neutralize the NIMBY, or “not-in-my-backyard” syndrome.

Wheelabrator plants were placed strategically near landfills that were nearing capacity and where power co-generation would yield profitable electricity sales. Those in the north were equipped to provide electricity in the summer and industrial heating steam in the winter. Plants were built near large metropolitan areas in Washington, Florida, Maine, New Hampshire, Massachusetts, and Maryland.

While more economical and environmentally friendly than landfills, incinerators still had their problems. Highly toxic materials, such as car batteries, were frequently put into the furnaces. To guard against further environmental harm from acid gas and dioxins, Wheelabrator fitted its plants with calcium sprayers and fabric filters that “scrubbed” harmful emissions from the exhaust.

With its experience in operating 14 incinerators and designing pollution control systems, Wheelabrator was established as a leader in building water and air purification systems by the early 1990s. The company’s Rust International subsidiary was the sixth largest engineering and construction contractor in the United States in 1992. In addition to engineering strengths, Wheelabrator differed from its main competitor, Ogden, in its offering of fully integrated plants based on exclusively licensed technologies built by Rust International.