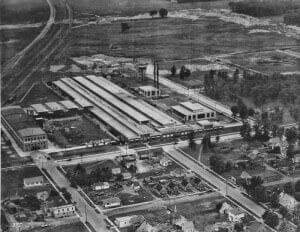 Bendix Corporation, now partly Bosch Corporation and Honeywell Aviation, began with Vincent Bendix from Moline, Illinois.  He invented an automotive electric starting motor drive, called the “Bendix Drive” in 1914 and became a millionaire.  The Bendix Drive and the 4-wheel brake system he invented were the basis for the formation of a new company in 1924.  The name became Bendix Aviation in 1929 when production began to include aviation products.

Buildings of brick, steel and concrete sprung up throughout the second half of the 1920’s on the site in the western section of South Bend.  The only building pre-existing on the site was a large 3-story building formerly occupied by Winkler-Grimm, manufacturers of delivery wagons.  The Winkler-Grimm building, dating from 1902, was purchased by Bendix, who had its second floor converted into a private apartment for Vincent.  The buildings from the 1920’s and 30’s are in the Art Deco style.  The central administration building on Bendix drive was ornamented with Art Deco copper zigzag door spandrels, a wood hood covering the entire entrance, and geometric detailing.

The Bendix Aviation Corporation suffered financial losses during the Depression and Vincent Bendix declared personal bankruptcy.  However, the firm experienced tremendous growth as a result of wartime production in the 1940’s.  In 1960, Bendix Aviation changed its name to Bendix Corporation to include its other activities, such as automobiles, space, missiles, and energy controls.