Before any European explorers had stepped foot upon the soil of the Old Northwest, the St. Joseph Valley was occupied by Native Americans. There have been several tribes and early native peoples located around the St. Joseph River. Some of the earliest groups to occupy what would later become northern Indiana and southern Michigan were the Miami tribe. Later, the Potawatomi would move into the St. Joseph River Valley region, utilizing the rich food and natural resources found along the river. The Potawatomi would occupy this region of Indiana and Michigan until the majority were forcibly removed in the 1840s. 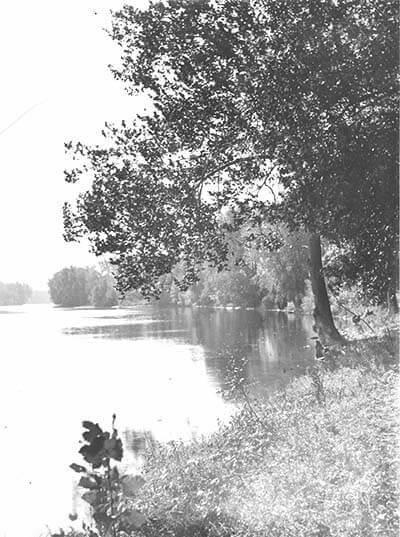 The main reason for the popularity of the South Bend area was that it was closest to the Kankakee River. To get to the Mississippi River from eastern Canada, you sailed west through the Great Lakes until you reached Lake Michigan. Then you traveled along the eastern or western shore of Lake Michigan until you reached the mouth of the River of the Miamis, or the St. Joseph River, and up that river to the portage at South Bend. A portage is a trail between two rivers. The South Bend portage was the shortest overland route to the Kankakee River. So, you got out of the St. Joseph River and walked overland along the portage to the Kankakee. The Kankakee River flowed into the Illinois River and then into the Mississippi. Once you got to the Mississippi, you could travel north, south, or cross the river to explore the West. This was the route used for centuries, first by Native Americans, then the French explorers and traders to travel from Detroit to New Orleans.

In addition to the portage, there were several other Native American trails that crossed throughout the Michiana (the combined Michigan and Indiana communities) area. One trail was the Fort Wayne Trail that lead from Fort Wayne, Indiana to Chicago, Illinois. Another popular trail was the Great Sauk Trail that started in Detroit, Michigan, went through Chicago and split into two trails in Missouri, “later becoming known as the Santa Fe Trail and the Oregon Trail.”

In 1680, the French first established a mission then in 1691 built Fort Saint Joseph in Michigan about 60 miles from the mouth of the St. Joseph River. The fort was established to protect the St. Joseph waterway and the portage trail. Fort St. Joseph became one of the most popular posts in the Old Northwest territory. However, the French lost the fort after the French and Indian War in 1763. The British then occupied Fort St. Joseph and many residents loyal and friendly with the French moved out of the Michiana area. The British never got a community established, and in 1781 French and Spanish soldiers captured and destroyed the fort. In the 1830’s Niles, Michigan would be established near Fort St. Joseph. Even today, Niles is known as the city of four flags, because four nations occupied the fort at one time or another (French, British, Spanish, and American).

The first real permanent residents of South Bend were the fur traders who had settled in the area because of the rich wildlife that congregated along, and in, the St. Joseph River. The first successful trader to occupy the St. Joseph River Valley was William Burnett. Mr. Burnett was from a very prominent New Jersey family, well educated, and had family wealth. He was attracted to this area because of the possibility of great wealth participating in the fur trade. Burnett built a storage warehouse for storing furs, maple sugar, grain, and salt near the mouth of the St. Joseph River (near the present town of St. Joseph, Michigan). Like most other traders, Mr. Burnett married a Native American wife. His death date has been lost over the centuries.