After George Rogers Clark and his army captured the lands west of the Appalachian Mountains, the Governor of Virginia, Patrick Henry, gave Clark and his men land in what is now Indiana. This land was settled by Clark and his men and they built a small town they called Clarksville, the first American settlement in Indiana. Jeffersonville and New Albany, Indiana were also founded around this same time.

Each township would then be divided into 36 equal sections.  Each section would be 640 acres in size.  The sections would then be numbered from 1 to 36.  The Ordinance of 1785 also had a stipulation that in every township, section number 16 was to be set apart for the use of a public school.  The remaining sections of a township were then to be sold.  This method of land surveying and township numbering is still in use today.

The English after the American Revolution, some of whom had stayed in forts around the Great Lakes to protect their fur trading interest, encouraged the Indian tribes in the Northwest Territory to form a confederation to drive out the new American settlers.  The Delaware, Shawnee, Miami and Potawatomi joined together in this new confederation.  Their leader was the Miami chief Little Turtle. 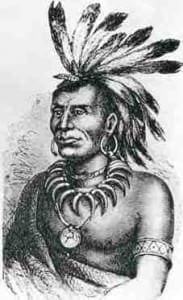 Arthur St. Clair, the governor of the Northwest Territory, led an army of 3,000 men into the Ohio Valley to stop the Indian attacks.  As they camped overnight, Little Turtle and his men silently hid very close to the camping soldiers to prepare for a morning attack.  Little Turtle’s Indian army attacked at dawn and killed one-third of St. Clair’s men.  This was a horrible defeat for the Americans.

President George Washington was upset at St. Clair’s defeat and assigned one of his best generals to lead the fight against the Indians. Washington appointed General “Mad Anthony” Wayne.  He was nicknamed “Mad” because he was a fierce fighting soldier.

Wayne set out for the Northwest Territory in 1793.  Washington had given him an army of about 1,000 soldiers.  “Mad Anthony” Wayne traveled through the western part of Ohio where he established a fort at what is now Greenville, Ohio.  He then spent the entire winter drilling and preparing his army for battle.  Meanwhile, the English built a new fort at Toledo, Ohio and named it Fort Miami, after a previous fort.

Little Turtle spied on “Mad Anthony” Wayne’s activities at Fort Greenville.  He gathered chiefs from the other tribes within the confederation and encouraged them to make peace.  However, the other chiefs were excited that the English had built the new Fort Miami and assumed they would help the Indians defeat Wayne’s army. 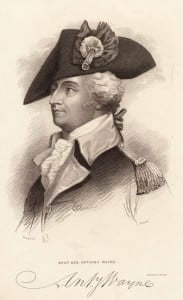 In the spring of 1794, “Mad Anthony” Wayne and his army left Fort Greenville, Ohio and traveled towards Fort Miami.  Wayne and his army moved very slowly, even stopping to set up two new forts along the way.  Meanwhile, several thousand Indians prepared for battle around Fort Miami around modern day Toledo, Ohio.

The Indians had decided to engage Wayne’s army at a place called Fallen Timbers.  Fallen Timbers was a place in the forest that had experienced a recent tornado that had knocked down many large trees.  The Indians concluded that this would be a very difficult place for a disciplined army to fight in an orderly way.

General Wayne let it be publicly known that he intended to attack the Fallen Timbers area on August 17th.  When the day came, he waited.  General Wayne knew that most Indians did not eat on the day before a battle.  He continued waiting for three days.  By that time, at least, 500 Indian warriors had left Fallen Timbers to look for food.  Those that remained were weakened by the lack of food.  General Wayne then led his attack against the remaining Indians at Fallen Timbers.  In two hours the battle was over.

The retreating Indians ran to Fort Miami seeking protection and shelter.  However, the English refused to let them in fearing a war with the Americans.  General Wayne then sent his army marching up the Maumee River destroying Indian corn fields and villages as they went.  At the Maumee portage, where the French had once built a fort, Wayne’s army built Fort Wayne.

The Battle of Fallen Timbers forever crushed the Indian confederation.  Little Turtle and the other chiefs of the confederation signed the Treaty of Greenville.  After signing the treaty, Little Turtle was recorded as saying, “I have been the last to sign it and I will be the last to break it.”  The treaty allowed Americans to settle peacefully into what is now Ohio and southeastern Indiana.  The treaty brought peace to the Northwest Territory for 15 years.

Indiana as a Territory

Tecumseh and His Brother "The Prophet"

Many Indians in the Indiana Territory were upset that the land promised them was now being sold on false promises.  The leader of the Shawnee, Tecumseh, had been a part of the Miami confederation and fought at the Battle of Fallen Timbers.  He dreamed of a separate state for the Indians, an idea the English had supported.

Tecumseh traveled from tribe to tribe, village to village lecturing about this separate Indian land.  He encouraged tribes from fighting among each other and unite to fight against the encroaching American settlers.

Tecumseh’s brother was a Shawnee medicine man named the Prophet.  As a medicine man he knew the prayers and customs of the Shawnee religion.  The Shawnee had great respect for him.

The Prophet lived in a place called Prophetstown that is located on the Tippecanoe River where Lafayette is today.

In the Treaty of Fort Wayne, that was signed in 1809, a group of Indian tribes agreed to sell 3 million acres of land in the Indiana Territory.  Tecumseh visited Governor Harrison on this matter.  The land was the common property of many different tribes of Indians, Tecumseh said.  He went on to inform Governor Harrison that the tribes that signed the treaty had no rights to sell that land, it did not belong exclusively to them.  Tecumseh made it known to the governor that the Indians would fight if any more of their land was taken.  Tecumseh’s warriors were eager to fight.  The Prophet made the announcements that through his magic he would make the Indian warriors invincible to the white man’s bullets.

Tecumseh left Prophetstown in 1811 to speak with Indian tribes south of the Ohio River.  Before he left he told his brother the Prophet to keep the peace until he returned.

William Henry Harrison decided to attack Prophetstown while Tecumseh was gone.  Harrison’s 1,000 soldiers traveled from Vincennes north along the Wabash River towards Prophetstown.  When they reached the outskirts of Prophetstown they pitched camp overnight.  At dawn on November 7, 1811 the Prophet, leading a group of Indian warriors, attacked Harrison’s army.  The army fought back and forced the Indian warriors to retreat.  This battle has become known as the Battle of Tippecanoe. Neither side won a true victory.  Harrison and his militia burned Prophetstown to the ground while some Indian warriors spread out through the Indiana Territory attacking settlers.  A majority of Indians left with Tecumseh to settle in Canada.

You can visit Battle Ground, Indiana and learn more about the Battle of Tippecanoe by clicking here

In America’s view, the English were to blame for the Indian attacks on American settlers.  They believed England was providing guns, supplies and encouragement to the Indian tribes.  Settlers in the Ohio Valley thought the solution was simple: attack Canada and drive the English out.  At the settlers request, the United States declared war on England (again) in 1812.  This became known as the War of 1812.

William Henry Harrison gave up his position as governor to lead the American military force against Canada and the English.  However, the Americans found it very difficult to war against Canada.  Most of the time the army was forced to defend itself against attacks.  From their fort in Detroit, the English sent out troops to attack American settlements, including Fort Wayne.  Indian warriors, led by Tecumseh, once again fought against the settlers on the side of the English.

However, an American commander named Oliver Hazard Perry led and attack against the English on Lake Erie in 1813.  The defeat of the English by Perry’s army led to a turning point in the war.  Perry’s victory weakened English control of the Great Lakes.  This defeat made it possible for Americans to cross Lake Erie by boat.  William Henry Harrison led his army across Lake Erie to attack the English at Detroit.

When Harrison’s army arrived at Detroit the English were gone.  The American army discovered the English were headed northeast on the Thames River.  Harrison and his 3,000 men followed.  A week later Harrison forced a battle called the Battle of the Thames.  In the battle, all of the English were either killed or captured.  The great chief Tecumseh had also been killed. 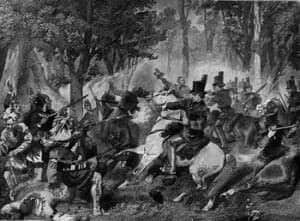 The Battle of Thames was the last war against Tecumseh’s confederation and ended the Indian attacks against American settlers in the Indiana Territory.  The War of 1812 ended with a peace treaty in 1814.  Neither side had actually won the war and the boundary between the United States and Canada remained the same.