Mishawaka was the home of Ball-Band footwear-the footwear that made the Red Ball trademark famous. Any study of social and economic life in Mishawaka is incomplete without a knowledge of the start, growth, and the policies that made the name “Mishawaka” known to millions of  people.

According to local newspapers, it was about 1838 that a woolen mill was first established in Mishawaka. After a series of hardships and some success, this woolen mill was purchased in 1867 by Jacob Beiger and his son, Martin V. Beiger. In 1874 a stock company was incorporated as the Mishawaka Woolen Manufacturing Company. At that time, the company employed 25 persons and produced flannels and yarn.

In 1886, Martin V. Beiger and Adolphus Eberhart, the two principle members of the firm, invented the all-knit boot. From the start, the knit boot was such an outstanding success that the manufacture of flannels and yarn was discontinued. 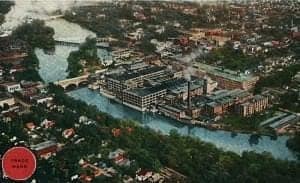 The knit boot was made with a black band around the top. In 1891, the Red Ball was added to the band, and it was registered as a trademark in 1901. The Red Ball on the black band naturally suggested the name “BALL-BAND,” and this name was also registered in 1901.

Lumbermens (heavy-duty work boots) was added to the line in 1899, and felt boots in 1895. Since these wool boots and socks were worn with rubber boots and shoes, the company decided to make its own rubber footwear. A rubber footwear plant was built and the first Ball-Band rubber shoes were made in February 1898. Light rubber footwear was added in 1916, leather work shoes in 1917, and canvas sport shoes (tennis shoes) in 1922. In 1924 the company’s name was changed to Mishawaka Rubber and Woolen Manufacturing Company. In March 1958, this was again changed to the Mishawaka Rubber Company, Inc. since the manufacture of woolen products had been discontinued.

From the start, all Ball-Band products have been quality products. The motto, “Good enough will do; Ball-Band must be the best,” adopted nearly 40 years ago, has been faithfully followed throughout the years. As a result of this honest reliability, the fame of the red ball had spread everywhere and was recognized as a standard in excellence in footwear.

In over a half century, the Ball-Band plant has grown from one small building with a handful of employees to one of the largest rubber footwear plants in the world. The plant encompassed more than 40 acres of floor space, and employed approximately 5,000 wage and salary personnel.