In the late 1880s, Oliver plows were being shipped to an 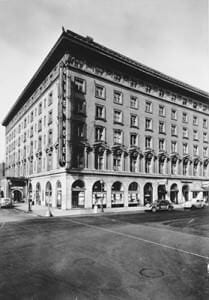 impressive list of places, including the British Isles, Japan, France, Germany, Mexico, Sweden, Greece and South American countries, prompting a nearly endless line of business visitors to South Bend from around the globe. To provide suitable accommodations for these guests, James and J.D. decided to build a grand hotel. Difficulties in obtaining a site delayed construction until July 1898, when the first stone for the foundation was laid at Washington and Main Streets, now the site of the downtown Chase Tower.

A gala grand opening was held December 20, 1899. The South Bend Tribune called it “the most magnificent hotel in Indiana, one of the finest in the United States.” The lobby and rotunda were described as Italian Renaissance, embellished in gold. The images of 16 females representing the seasons, the arts, earth, water, fire, and air were painted at the top of the rotunda, and this lavish decor extended to all other areas of the hotel.

One of the many innovations was an independent electric plant consisting of three dynamos driven by three engines to give current for 1,700 lights in the hotel. Later, electric current was provided by the Oliver Electric Plant, which had been built by the Olivers on the West Race of the St. Joseph River. (The foundations and part of the control gates of this plant were incorporated into the Century Center complex years later.) Most of the hotel construction was completed under the watchful eye of James Oliver, then in his 70s. J.D., exhausted by an extraordinary workload with the company and other matters, had been ordered to take an ocean voyage to recuperate. 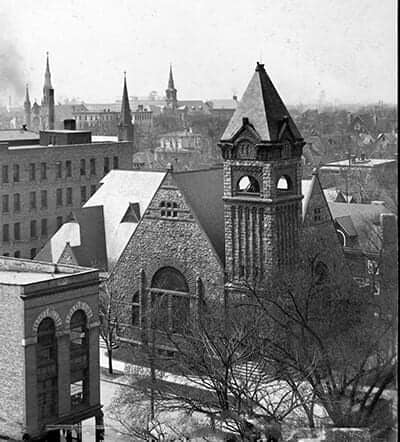 Two year earlier, In 1897, James had agreed to pay one-third the cost of the proposed new Presbyterian Church, at the southwest corner of Lafayette and Washington Streets. James was not an active member of the congregation, but others in the family were.

On May 30, 1900, on the occasion of the 56th wedding anniversary of James and his wife, Susan, the citizens of South Bend expressed their gratitude to the couple for their many public gifts by presenting them with an 18-carat gold loving cup. The 14-inch cup, purchased from Tiffany and Company in New York, was engraved with portraits of the Olivers, the new Oliver Hotel, the original factory on the West Race, and the new factory that had been erected on the southwest edge of the city. That same day, J.D. and his wife, Anna Gertrude, announced their new home at 808 West Washington Street would be named Copshaholm, in honor of James’ birthplace in Scotland.