Now that Indiana had become a state and land was affordable, thousands of people migrated to Indiana. Some came by themselves while others came together in large groups. Some of these new Hoosiers were looking for a promising new start in a new land.

In 1814 a group of 800 people moved into the Indiana Territory. They had traveled to Indiana, like many others, on flatboats down the Ohio River. This group of people had a leader named George Rapp and they settled on the banks of the Wabash River.

Rapp’s intention was to start a utopian society along the Wabash. His followers worked very hard clearing land, draining marshes and planting crops. They set up a new town called Harmonie, Indiana. Within ten years Rapp and his followers had built fine brick buildings and a church. They also constructed a sawmill and grainary. Sheep and fruit trees were raised to help support the utopian society at Harmonie.

In 1825 George Rapp and his followers moved back to Pennsylvania. A Scottish factory owner named Robert Owen bought the Harmonist’s land. He renamed the town New Harmony, Indiana. Owen hoped to make New Harmony a model community and center for learning. 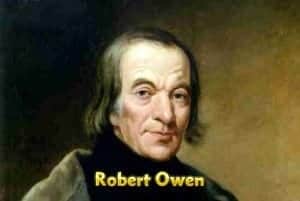 More than 1,000 teachers, writers and scholars moved to New Harmony. Owen’s dream never came true. After Robert Owen had spent most of his money in New Harmony he left and returned to Scotland.

A majority of the New Harmony settlers stayed and fostered a community of learning and cooperation. Many of the ideas the New Harmony residents created still exist. These ideas included kindergarten, public libraries, trade schools and women’s clubs.

You can learn more about New Harmony, Indiana by clicking here

Most of the early settlers to Indiana settled in the southern part of the state. However, by the mid-1800s settlers were buying and settling on the fertile soil of the northern part of Indiana. Corydon, Indiana, the first state capital, was no longer a central location for the population of Indiana, so a new city was chosen for the capital of Indiana. The new capital would be Indianapolis, a city located at the center of the state.

Transportation in Indiana during the late 1700s and early 1800s was mainly done by river. Many early settlers to Indiana traveled by floating down the Ohio River. Products and crops were sent by flatboat to be sold at market. The most common boats used during this time were flatboats.

A group of men could construct a flatboat in about 30 days. If they were transporting products and crops they would load them onto the flatboat and float down the Ohio River. They would travel down the Ohio into the Mississippi River and south to New Orleans. It was not a safe trip, there were many seen and unseen dangers to flatboat captains. When Abraham Lincoln was a young man he was working aboard a flatboat and during the trip to New Orleans a gang of men tried to kill the captain and steal the cargo.

With the invention of steam power it was now much easier to travel along the Ohio River. The steamboat had a steam engine which turned a paddle wheel in back of the boat. Some steamboats had two paddle wheels, one along each side of the steamboat. This paddle powered the boats up and down river.

A steamboat could go downstream twice as fast as a flatboat. It could also go upstream, which was a major improvement over a flatboat. When a flatboat reached its destination, it was usually disassembled and sold for lumber and the crewmen would walk or ride a horse back home.

The first steamboat arrived on the Ohio River in 1811. Within 30 years there were literally hundreds of steamboats on the Mississippi and Ohio Rivers. Steamboats were also used on the Great Lakes. Michigan City, Indiana became an important port city for lake steamboats.

By 1824 there were four delivery wagons that ran from Indianapolis to Corydon. These wagons carried products and supplies between the two cities. There was also a passenger stagecoach that carried people to the new state capital.

Indiana still lacked a passable road system. There were few roads leading to and from Indianapolis. One of the first roads in Indiana was called the Buffalo Trace. This was a former bison trail that connected the cities of New Albany and Vincennes. In 1829 the National Road reached Indiana. This road was built from Maryland westward. The United States Congress funded the building of this road. Eventually the National Road (U.S. Highway 40) made it to St. Louis, Missouri. A major technological advantage of the National Road was that it was covered with a thick layer of gravel. The National Road was able to be used all year, regardless of the weather.

The National Road went through Richmond, Indiana through Indianapolis and on to Terre Haute. Indiana was now connected to states in the East and West. In the 1830s Indiana built a north-south road that connected Michigan City with Madison and ran through Indianapolis. This new road was called the Michigan Road.

New York state had finished its famous Erie Canal in 1825. Some industrious individuals in Indiana thought canals would be a great addition to the transportation system. It was thought that the canals would help farmers, who lived far from a deep river, get their crops to market faster.

The most important canal built in Indiana was the Wabash and Erie Canal. This canal started at Lake Erie and followed the Maumee River to Fort Wayne. The canal then followed the Wabash River to Terre Haute and then to Evansville, along the Ohio River.

However, by the 1850s most of the canals planned for Indiana were never completed. The rise of railroads had signaled a new era in transportation for Indiana.

To learn more about Indiana’s canals, visit these websites:

Indiana’s very first railroad was built in Shelbyville and was only about a mile long. The passenger railcar was pulled by a horse and people rode in it just for fun.

Indiana’s first major steam railroad was completed in 1847. The rail line went from Madison to Indianapolis. The railroads brought an abrupt change to Indiana. Trains could haul tons of products and goods at a very low cost. People could now travel a great distance in one day. Railroads could also be built just about anywhere.

Most of the new roads and railroads being built in Indiana passed through Indianapolis, because it was the state capital and a central location within the state. The growing use of railroads made Indianapolis a center of transportation and helped it become the state’s largest city.

Lafayette was the first city in Indiana to have a completely electrified street railway system that was completed in 1888.

However, South Bend had experimented with an electric street car in 1882, but there was insufficient electric current to move it more than a few feet. Three years later South Bend engineer, Charles Van Depoele, had a car running a couple of miles, but the line reverted to mule power when electric power and equipment proved too expensive.

By 1893, there were 173 miles of electric cars operating throughout Indiana towns and there were still 92 miles of horse and mule car lines. 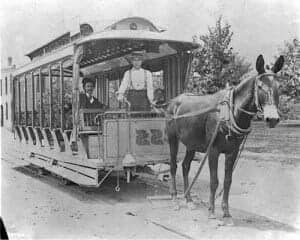