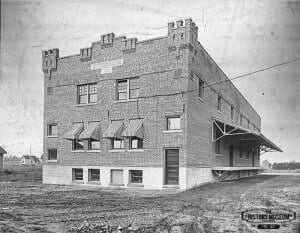 In June of 1903 a group of South Bend saloon keepers of German, Polish and Hungarian descent organized the South Bend Brewing Association to manufacture and sell beer.  Their building, of Medieval castellated design, was completed in 1905.  Its four story facade with corner towers and tiers of lower height in the rear reflect the necessities of brewing beer.  Height was needed for processes that were based on gravity flow, assisted by pumping and hoisting.  The horizontal extensions towards the rear of the building contained power, heating and refrigeration equipment and loading facilities.

During Prohibition the company’s name was changed to South Bend Beverage and Ice Association to reflect the change of products to non-alcoholic drinks such as Hoosier Cream Soda and the production of ice.  In 1922 George Voedisch, a 25 year veteran from Muessel’s Brewery, became president and general manager, and the Voedisch family remained in control until the brewery closed in 1950.  After Prohibition, 50,000 barrels of beer were produced yearly, serving northern Indiana and southern Michigan; by 1950 production was down to 25,000 barrels a year.