In 1876, almost 20 years after he received his first patent for his method of chilling plowshares, James Oliver was the undisputed leader in plow manufacturing in South Bend. By that year his company, the South Bend Iron Works (later to be name The Oliver Chilled Plow Works) was not only the largest foundry in northern Indiana, but the recipient of most of the honors awarded to plow manufacturers at the St. Joseph County Agricultural Society Fair. But in 1876 this dominance was threatened by the emergence of the South Bend Chilled Plow company. Since Oliver’s chilling process was associated with the city of South Bend, he viewed this new product as being both an infringement on his patent and good will. Although he attempted to fight this new competitor, Oliver never brought suit against them and the battle for precedence in the agricultural market; that was left to the judgements of the farmers who used these implements. 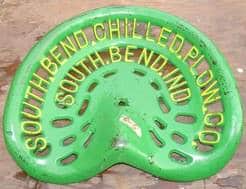 The South Bend Chilled Plow had its origins in the Knoblock Brothers’ Manufacturing Company. This organization was founded on April 18, 1871 by John C. Knoblock, William Knoblock, Theodore E. Knoblock, and John H. Dolman. These gentlemen bought and renovated the buildings of the old Northern Indiana Normal College and began manufacturing furniture on an extensive scale. Despite early promises of a successful future, the Knoblock Brothers’ Manufacturing Company manufactured nothing in 1875 and spent that year disposing of its wares. The new company was permanently crippled by the affects of the Panic of 1873 and the decreasing supply of fine lumber in the South Bend area.

In 1875 the Knoblock brothers once again renovated the former Northern Indiana Normal College and began manufacturing reapers. They called their new company the St. Joseph Reaper and Machine Company and in 1876 they made 650 chilled plows that were distributed as samples to local farmers. Their product caught on among the farmers in the St. Joseph County area; so despite the plant fire which took place in 1877, the company sold 4,672 plows that year. This number marked a 700% increase in business over 1876, the year when plows were introduced (and was insufficient to fulfill many unfilled orders).

On July 1, 1878 the company was reorganized and incorporated under the name of the South Bend Chilled Plow Company with Adam S. Baker as president, J.C. Knoblock as treasurer, and George W. Baker as secretary. In that year they sold well over 10,000 plows. Two years later, in 1880, the company employed 100 men and manufactured 50,000 plows. The plant was filled with modern steam power machinery and the buildings were one and two story brick structures. The plant was made up by a foundry with 35,000 sq. feet of surface space, wood shops of 12,000 sq. feet, blacksmith shops of 21,000 sq. feet, grinding shops of 4,800 sq. feet, setting up shops of 6,000 sq. feet, and many other buildings of the same approximate size. This gave the entire factory over 5.5 acres of floor space.

The company manufactured high grade plows and cultivators under its own patents, including not only chilled plows, but steel plows, sulky plows, gang plows, the world-famed Casaday three wheel sulky plow and cultivators. In time the company’s products were shipped all over the world.