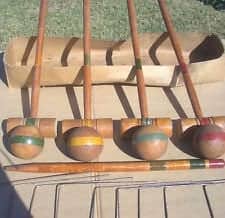 to produce croquet balls, mallets, and stakes by hand in their spare time. Their workshop, on the west bank of South Bend’s St. Joseph River east millrace, was only 15 square feet, and the total investment of the two men was only $1,302.40.

Because croquet was one of the few outdoor activities in which proper young women of that era could indulge, the croquet sets produced by Badet and Teel gained popularity throughout the country. Their business thrived. 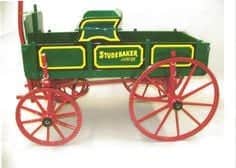 In 1888 the firm was officially named the South Bend Toy Manufacturing Company and moved its operations to 1012 High Street. This location, where the company remained for 85 years, was just a few blocks from a thriving wagon business run by several young brothers named Studebaker. The brothers made a deal with South Bend Toy whereby South Bend Toy would build youth-size Studebaker farm-type wagons.

These wagons, like their larger counterpart, became popular across the land, and led to production of other small wagons by the toy firm which eventually became an important product of the firm for many years.

Production was at an all-time high until the advent of World War II, when facilities were converted to produce war time products such as special packaging for military vehicles and aircraft parts manufactured by the Studebaker Corporation and Bendix Aviation Corporation. They also produced tent poles and army and navy security products. However, baby carriages were declared essential items during the war and South Bend Toy was allocated the critical material to manufacture these under high priorities.

After the war, toy and croquet production was resumed. Then in 1960, South Bend Toy became a wholly-owned subsidiary of Playskool Manufacturing Company of Chicago. In 1968, the Milton Bradley Company took both Playskool and South Bend Toy on as domestic subsidiaries. This marked the consolidation of three of the most respected companies in the toy industry.

The giant retailer Sears & Roebuck had purchased products from South Bend Toy since, at least, 1897 when the Sears catalog displayed two Shoe-fly Rockers (rocking horses with seats in them), a steel toy wagon, a boy’s farm wagon (a replica of the Studebaker farm wagon of that day), and croquet sets.

In the summer of 1973, South Bend Toy moved its operations into the former Bendix Home Appliance plant at 3300 West Sample Street, a modern one-story plant and office building of 210,000 square feet in which a 35,000 square feet addition was made. The move to this building, on a 17-acre tract of land, increased South Bend Toy’s manufacturing capacity substantially and provided ample room for future expansion.

During the peak season, South Bend Toy employed up to 400 people, many of them second and third-generation employees of the company. Many of the employees spent most of their working lives with the company.

By the 1980s the company was suffering from cheaper toys made overseas and Milton Bradley made the decision to scuttle many of its lower-producing plants. South Bend Toy was closed in 1985. The main office building housed the South Bend license branch for a time, but the plant currently houses the South Bend Chocolate Company.