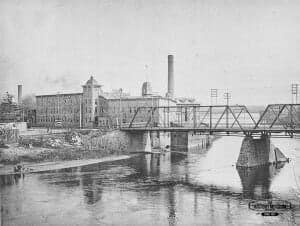 The South Bend Woolen Company was organized and incorporated in 1869 by Joseph Warden, John and Henry Niles, all of whom were from Mishawaka, Indiana. The Niles brothers were sons of the owner of the St. Joseph Iron Works Company (Mishawaka). Joseph Warden had been one of the organizer of the Mishawaka Hydraulic Company in 1867 and had been associated with the Palmer and Warden Woolen Mills in Mishawaka from 1859 through 1867. The South Bend Woolen Company may have, in fact, been an expansion of that business. John Niles seems to have only been involved as an initial investor, his name soon drops out of company references. Two other men, Corwin Van Pelt and George Lewis, became involved in the operations of South Bend Woolen very early. Van Pelt was a Civil War veteran, little is known about Lewis.

The mill buildings, completed in March 1870, were located on Water Street (now LaSalle) between the East Race and the St. Joseph River. The first building was brick, with a main section of four floors (one a basement), 36 feet by 100 feet. There was a southern projection of two floors, 12 feet by 24 feet and a west wing of 30 feet by 50 feet, 20 feet tall, probably all on one floor. The mill’s machinery was powered by a 60 inch water wheel (turned by water), one of the largest in the area. Twenty five to thirty people were employed to run the 500 spindles and other machinery. However, the Manufacturers Census of 1870 only lists 12 men, 6 women, and one child as employees in the company’s first year of operations.

The South Bend Woolen Company apparently made slow but steady growth throughout the 1870s and early 1880s. According to Turner’s Business Annual, the value of products offered by the company increased from $80,000 in 1872 to $106,000 in 1877. The number of employees grew to 40. An office wing was added on the east side of the main building before 1885. Unfortunately, the company is not listed in the Manufacturer’s Census of 1880, so a comparison cannot be made from the government’s statistics. Turner’s Business Annual hinted at a depression in the woolen trade in general, to justify South Bend Woolen’s slow beginning. 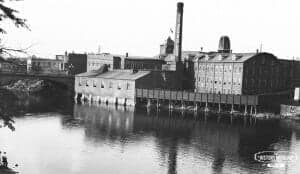 much as described by Turner when it was built. The small southern projection was the picker room, where the raw wool was cleaned. Carding took place on the first floor of the main building (and probably spinning also). Weaving was done on the second floor. Dying was carried out in the west wing. Drying and finishing was done in the main building, in the attic and basement. A two-story office area had been added on the east and some steam power had been added to lend consistency to the water power supply.

Between 1881 and 1883, Joseph Warden left the company to take up the occupation of a wool broker in Chicago. He continued to maintain a residence in South Bend. The South Bend Woolen Company was operated by the remaining officers, Henry Niles, President; Corwin Van Pelt, Secretary-Treasurer; and George Lewis, Superintendent. Turner and Van Pelt had been active in South Bend politics and public affairs. Turner had been a City Councilman, and Van Pelt was to become active in the Humane Society and South Bend Parks Commissioner. Nile continued to live in Mishawaka, since his primary business interest, the St. Joseph Iron Works, was located there.

After 1885, the South Bend Woolen Company launched into a period of expansion. By 1891, several new wings had been added, including the three-story Italianate wing with a tower that was in the middle of the new main building. Several new boilers were added, increasing the steam power and the buildings were lit by electricity. The South Bend Tribune for June 29, 1891, reported that the South Bend Woolen Company had purchased 400,000 pounds of wool that year to produce its cashmere, flannels, blankets and yarn.

Expansion of the physical plant continued throughout the 1890s, indicating an expansion in business. By 1905, The South Bend News reported that the company did $400,000 worth of business annually and employed 230 workers. S.A. Niles and Henry Niles, Jr. had joined the company as officers by 1907 and William Fisher as the new Superintendent, replacing George Lewis who had died in 1902 at the age of 58.

The President of South Bend Woolen Company, Henry Niles, died August 15, 1909 at his home in Mishawaka. He had also been President of the St. Joseph Iron Works, and his obituary gives much more detail to that business interest than to the woolen company, indicating the relative importance to each to Niles. After Henry Niles’ death, the South Bend Woolen Company seemed to decline. His son, H.G. Niles, Jr., served as President and the Niles heirs and the Niles estate continued to own a majority of the company’s stock. However, by 1915 operations were nearly at a standstill. One employee went so far as to put a lien on the company buildings in order to assure payment of wages due him. The Central Bond and Mortgage Company of Chicago had become an important stockholder and an officer in the company. C.B. Little had become President by September 1915. Other Chicago men were also brought in as officers. By 1916, the Niles family was no longer associated with the company. South Bend Woolen Company experienced a brief revival around this time, probably as a result of new management and increased orders for woolens needed for World War I military uniforms.

Before 1922, several Studebaker family members became involved in South Bend Woolen Company. Clement Studebaker, Jr. was Chairman of the Board and F.H. Wellington, a Studebaker company officer, was President. Colonel George M. Studebaker was also a member of the board. But things were not going well at South Bend Woolen. The mill shut down in 1923 and was placed in the hands of a receiver.

In December 1923, reorganization plans were announced and on May 1, 1924, South Bend Woolen Mills, Inc. was organized. Capital raised from the sale of new stock was used to buy out the interests of the old stockholders, the Studebaker family. The new officers were; B.H. Pegram, President, who had been associated with woolen businesses in Chicago and New York; George Hewitt, Vice-President, who had briefly been Superintendent around 1916 and had, for many years before, been associated with Stephenson’s Underwear Mills, also in South Bend; D. Sherman Ellison, Secretary, a local businessman; and I.R. Shute, Treasurer, a wool broker and banker from Cassopolis, Michigan. The new Superintendent, F.W. Calvert, had previous experience in wool manufacturing in England and Canada. There were 190 stockholders, 31 of which lived in the South Bend area. In February 1925, the company announced the plant would be operating at 100% capacity soon, employing 275 to 300 people.

In spite of the new officers’ hopes and plans, the South Bend Woolen Company again failed. By 1927 it was completely out of business and the mill buildings on LaSalle Street were vacant. The buildings were demolished in 1932 to make a parking lot for the Indiana and Michigan Power Company (that was located on the next street south, Colfax Avenue).

What specifically caused the demise of the South Bend Woolen Company is unknown, however some of the contributing factors were probably the small size of the operation and the general shift in the textile industry from the northern states to the South. In 1924, South Bend Woolen had only 60 looms, operating in buildings ranging in age from 25 to 55 years old. About 40% of its power continued to be supplied by the East Race, making it one of the last South Bend industries relying on this source of power. It sold its fabrics on a pre-order basis only, a policy which was admittedly unusual in the industry. Most was sold to the makers of menswear, the rest to uniform and blanket manufacturers. As these companies became larger, naturally they would need larger quantities of fabric to fill their needs and South Bend Woolen had not expanded its operation for 25 years. The textile business all over the United States was undergoing vast changes in the first 30 years of the 20th century and a small company like South Bend Woolen Company could not hope to survive in a business that was killing off the giants in the industry.