World Famous: The Olivers and the American Dream

James Oliver was a Scottish immigrant who settled in Mishawaka in the 1830s before moving to South Bend in the 1860s. An inventor, James received 45 patents during his lifetime, most 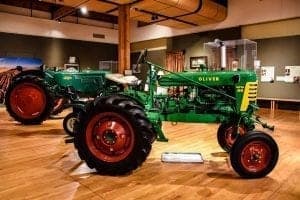 notably, one for the chilled plow. James’ son, J.D., was as brilliant in marketing and finance as his father was in agricultural innovation. Together, they established the Oliver Chilled Plow Works in South Bend, with James’ plow the keystone product of the firm. Their company successfully marketed plows, and later, tractors around the world. In time, mergers with other companies developed a strong manufacturing base for farm implements. World Famous: The Olivers and the American Dream showcases vintage Oliver plows plus tractors that include an 1946 Oliver Row Crop 70, a 1957 Super 44, which was one of only two models of tractor to be manufactured in South Bend, and a 1972 Oliver 125 Town & Country lawn tractor. The fire doors once in the Oliver factory, James Oliver’s wooden desk from his office, signs from the company, and other industrial artifacts provide a behind-the-scenes look at the best-selling plow in the world, one that provided the livelihood for thousands.

The exhibit also captures stories of the Olivers’ attractive home life. In 1897, J.D. and his wife, Anna, moved with their four children into their new home at 808 West Washington Street. Copshaholm, as they would later call it, was a 38-room mansion that would be their home for the next 75 years. In 1988, the Oliver family donated the mansion and all its contents to The History Museum, and two years later, the historic house was opened to the public for daily guided tours. As visitors move through World Famous: The Olivers and the American Dream, they can discover an early 1900 brass bed, gowns worn by Anna, and other personal family treasures that offer a perspective of a wealthy home life from the Victorian Era and Gilded Age to the Roaring Twenties and beyond.

World Famous: The Olivers and the American Dream also presents a compelling look at the Oliver family’s contributions to the community and ways the Oliver family changed the physical fabric of their hometown. During their lifespan, James and J.D. made significant changes in the downtown of South Bend. Their philanthropy resulted in the construction of several buildings in the South Bend community, including the Oliver Hotel, Oliver Opera House, and a city hall for the community. A loving cup presented to James and Susan Catherine Oliver upon completion of the Oliver Hotel is a remarkable symbol of the community’s gratitude for the family’s philanthropy.

Scroll Up
Send this to a friend