The Development of Modern Indiana

The issue of reconstruction for the southern states largely dominated the decade following the Civil War. Reconstruction concerned the whole country and how a nation was going to deal with a new united country.

Reconstruction referred to the plans of the national government to help rebuild the South, and Indiana’s leaders played an important role to form such policies. The main issue in reconstruction was the question of how to deal with a large population of freed Blacks and whether or not Blacks should have the right to vote. Some leaders thought that the freed Blacks should have the right to vote. Still others thought that they should have the right to vote immediately and that the administrators of the former Confederate Government should be punished, and even executed. This group became known as the radical Republicans and included such Hoosiers as Schuyler Colfax (South Bend), Speaker of the House of Representatives and George W. Julian, a staunch abolitionist and a representative of eastern Indiana.

On the conservative side were those who favored a gradual change for the South and opposed the ideas of the radicals. Daniel W. Voorhees, from Terre Haute and Senator Thomas A. Hendricks from Indianapolis were the leading Hoosiers in Congress who favored a less violent attitude towards the defeated Confederacy. However, the radicals, and the radical point of view, was a view held by a majority of representatives and their policies went into effect. One of their main accomplishments was the passage of the Fifteenth Amendment.

Indiana’s General Assembly had already ratified the Thirteenth and Fourteenth Amendments that gave Blacks their freedom and rights of citizenship. There had been great difficulty among the states in getting the 13th Amendment passed, however the 14th passed with little or no discussion.1 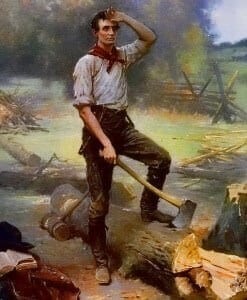 The reconstruction policy that the radical Republicans of Congress put into effect for the treatment of the defeated southern states is looked upon today as one of the shameful periods of our collective history—the tragic carpet bagging days. Some of Indiana’s representatives in Congress, like Schuyler Colfax and Oliver P. Morton, were among those radical Republicans. Not all Republicans favored the policies enacted by the radicals. The outstanding Republican opponent of such policies was a man who spent 14 years-from the age of 7 to 21-in our state of Indiana. That man was Abraham Lincoln, the 16th President of the United States. President Lincoln had already instituted a just and humane policy for the treatment of the defeated southern states when his assassination closed his career, and his wishes.

Andrew Johnson, the Vice-President, was a staunch supporter of Lincoln’s policy and tried to carry it out. He was bitterly opposed by radicals in Congress, who finally brought impeachment proceedings to remove him from office. The impeachment failed and Johnson remained President, but he was helpless to prevent the policies of the radical Republicans from going into effect. His vetoes of bills were simply overridden by the radical Republicans who controlled Congress for 12 years following the Civil War.

The ratification of the 15th Amendment by Indiana was not followed by an immediate change in the Indiana Constitution. Blacks were still excluded from voting in the state and, in addition, free Blacks were not allowed to enter the state. During the next two decades, Blacks were gradually granted the standing of full citizen. The laws made to restrict Blacks within Indiana were eventually eliminated and they were allowed to take part in the making of contracts. In education there was to be a fair distribution of public funds between white and colored schools. In 1881, Blacks gained full equality in voting and the only remaining discrimination in the Indiana constitution at the time was the clause that prevented Blacks from taking part in the state militia.3 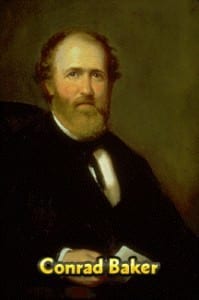 There were two governors during the period of the Reconstruction, Conrad Baker and Thomas A. Hendricks. Baker was lieutenant governor under Oliver P. Morton and gained the governor’s office when Morton resigned to become a U.S. Senator. Baker’s home was in Evansville. He ran for the office of governor against Thomas Hendricks in the election of 1868. Humane and public oriented, Baker was known as a good man with a high intellect. He was especially concerned with the social welfare of his fellow Hoosiers. He actively secured reforms in the prisons and other state institutions. Governor Baker was a believer in eliminating the state’s debt as soon as possible and began making arrangements for paying it off. When he left office the state’s debt was significantly reduced. He died in 1885.

Governor Hendricks took office as Indiana’s governor in 1873. He had served in the 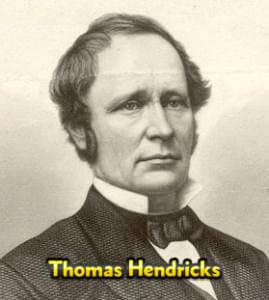 state legislature, in the constitutional convention of 1850, as a United States Senator and previously ran for office of governor twice (both times being defeated). His first Indiana home was in Shelbyville, but had moved to Indianapolis. In what became known as the “Disputed Election of 1876,” Hendricks ran for the office of Vice-President of the United States with Samuel J. Tilden, but never won the national election of that year.4 He gave 35 years to public service in this state and finally died in the office of Vice-President in 1885.

A national depression hit the United States in the first year of Hendricks’ term as governor. This depression did not affect the expansion and prosperity throughout Indiana after the Civil War; but the industrial and commercial areas of the economy within the state suffered. There were conflicts between laborers and employers, often followed by strikes. In the coal industry around Knightstown and Brazil, rioting was quieted only after the involvement of the state militia. At Logansport, employees of the Pennsylvania Railroad, who had recently gone on strike, were causing severe problems for the local sheriff, who had contacted the governor for help. Detachments of troops were sent to Logansport to disperse the crowds of disgruntled workers. There were several other incidents, but none led to any serious violence. 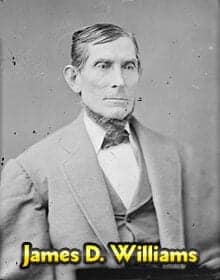 Governor James D. Williams was elected to office during the first centennial of American Independence (1876). The 100 years from the signing of the Declaration of Independence had been a century of progress for the state of Indiana. Governor Williams will long be remembered in history as the “farmer governor of Indiana.” He became the 17th Hoosier governor and was the first farmer by occupation to make it to that office.

In his early youth his parents moved from Ohio to Knox County, Indiana, where he resided until he went to the state capital to assume the duties as governor. Williams’ early education was a one-room schoolhouse and to this he added a good general knowledge of current events. When he was 20 years old his father died making Jim the sole support for his family. He soon established a good reputation within his community and was known for his honesty, hard work and common sense. Williams became the wealthiest man in his Knox County community through his excellent farming techniques.

Williams’ first taste of public service was as a justice of the peace. Four years later, in 1843, he was elected to the General Assembly where he served until 1874, when he was elected to Congress. In his campaigns for governor he wore his usual homespun clothing, or blue jeans. His opponents called him “Blue Jeans” and made fun of him, regarding him as an ignorant hick. This was a huge mistake on his opponent’s part, knowing that Indiana is a highly agricultural state and Williams’ appeal to the Hoosier farmer. When the campaign ended, the election returns showed that the old farmer from Knox County had beaten his opponent, General Benjamin Harrison, by over 5,000 votes!5

Williams’ administration is marked by some very important events. Several amendments to the state constitution were proposed at this time and pushed forward to final adoption in 1881. The most important events included the holding of elections on the first Tuesday after the first Monday in November (instead of the former October elections), limiting of debts by local communities and elimination of the restrictions against Black voters. Governor Williams died November 20, 1880, and lieutenant governor Isaac Gray served out the remaining 7 weeks of his term.